Why learning how to edit a movie, will make you a better screenwriter

There is the saying, that editing is like storytelling and it is absolutely true. The screenwriter arranges words on paper. The editor arranges shots.

First, we need to define two terms, that are often used on a daily screenwriting basis, but get mixed up quite a lot, or, are somewhat defuse in their common determination.

What’s the difference between story and plot?

Choosing what to tell, is the story.

Choosing how to tell it, is the plot.

The “how” is the hard part. You have to make sure the reader/viewer will stay invested in your story and not just because you presented a strong question to begin with. You have to create a dramatic journey where emotions are key. You want to evoke anticipation, tension, curiosity, surprise and so forth, in the reader. Like Irwin Blacker said: Plot is more than a pattern of events; it is the ordering of emotions.

Story: A newspaper boy discovers a hidden bunker that is filled with comics and food and gets trapped in it for 10 years.

Plot: Where do you start? Do you tell the story in chronological order? Could be quite boring and it also depends on what theme your movies has. If your theme is: Can someone find back to life, even if he lost his complete childhood? If that’s going to be your theme, you might want to start by opening up the bunker, after ten years. So you have to keep in mind, what your theme is, to make a decision on what your plot will look like. View it as a pearl string of emotions. You want to tell the story in a way, that you keep adding emotion „pearls“ to the string, so that in the end, there will be a complete array of emotions to make a up the pearl string. Try to think like an editor: How can I arrange shots in order to get the most emotional response?

But I’m in the writing business, I don’t have the shots yet, right? Wrong.

A question that I get asked, by my students, a lot, is: What is a line of action? First I wasn’t to sure what to make of such a question, because it seemed fairly obvious. A line of action, is the words you put down in a paragraph of a screenplay, that form an image of the action, right? Well, yes sort of, and while we were discussing this in class, it dawned on me, that it was way more than this. A line of action is the same as a shot! What you describe in this line, gets translated into an image later on. So why not start thinking of it, like it being a shot?

So if it’s just that, then we have to think shot by shot. Image by image. Frame by frame.  This is what it means to think like an editor. You need to create a series of shots in your head, that are divided by cuts and then write them down.  Every fullstops is actually a cut. translate them into words, that you can put on the page.

On the next level of writing this means, paragraphs are a sequence of shots. One sentence can be viewed, as one shot and a combination of two or three shots, is a sequence and therefore a paragraph.

For example: A gun. A hand, with the trigger finger missing, reaching out to the gun. The smile on a beautiful woman’s face. This is one paragraph. You could start the next paragraph with the establishing shot: a woman is holding a little kid at gunpoint. Her right hand is holding the gun awkwardly, because her index finger is missing.

A steamy mirror. A hand wipes a part of it clean. A face becomes visible in the reflection. The eyes of the bearded man in his late forties, look foggy. A hand reaches for a hair brush but fails to grab it. The hand moves around in search for the brush. Got it. The face in the mirror smiles. The eyes of the man don’t follow the brush as it makes its way through the thick dark hair.

This is an example of how you can describe someone as being blind, without ever mentioning the word.

Imagine leading the focus of the reader to certain aspects and details, that you want him/her to see. Think in images, not words.

So, no matter if it’s editing a movie or writing a screenplay, it mainly comes down to, how you arrange the shots. In which order, do you present them to the viewer.

The way you choose to present them evokes anticipation, tension, curiosity, surprise and so forth in the reader and by that, you create emotions.

Let’s see, what Hitchcock has to say about all this:

And I leave you with just another great Hitchcock example, the ending of North by Northwest.

I start with the excerpt from the script: 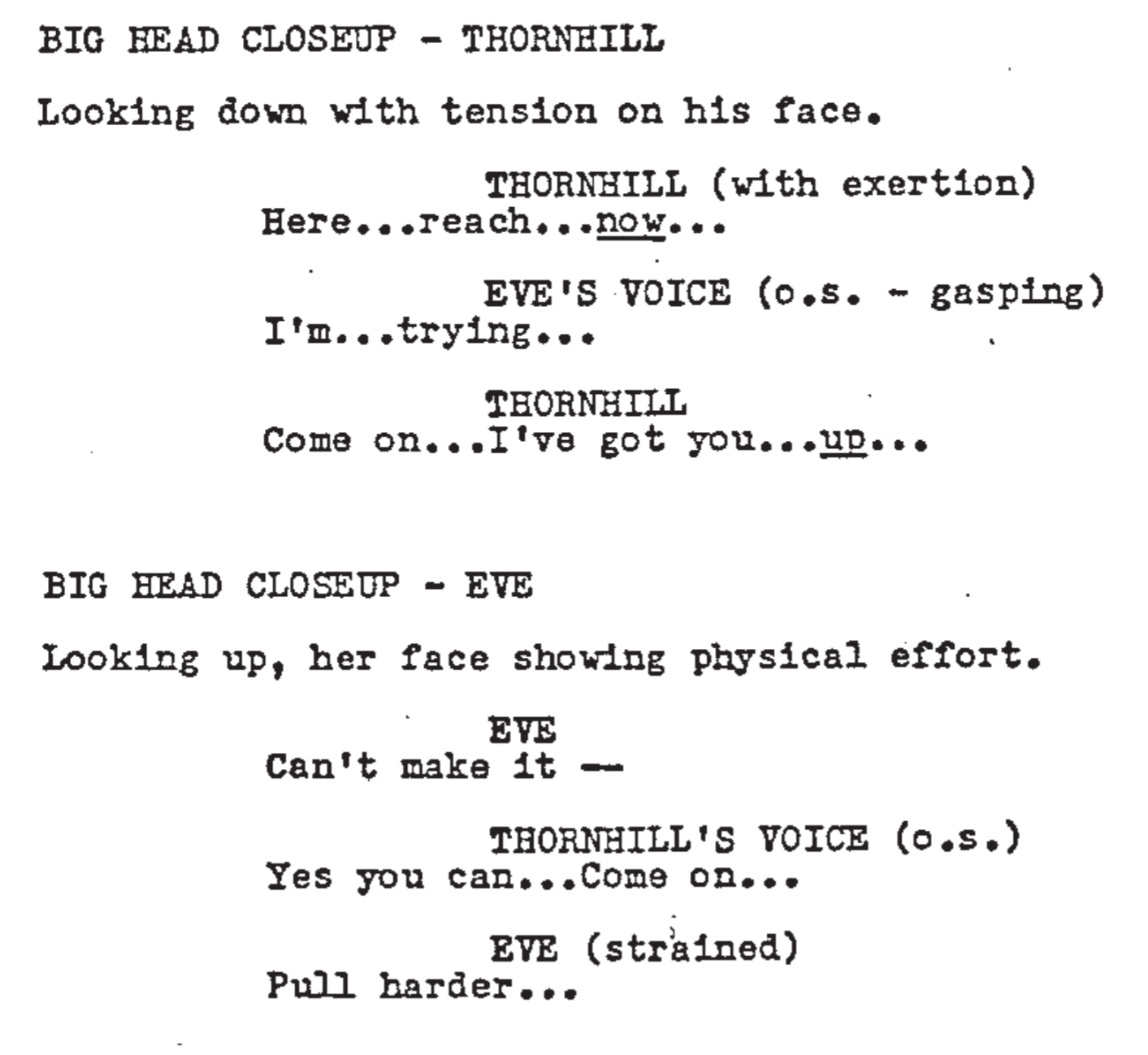 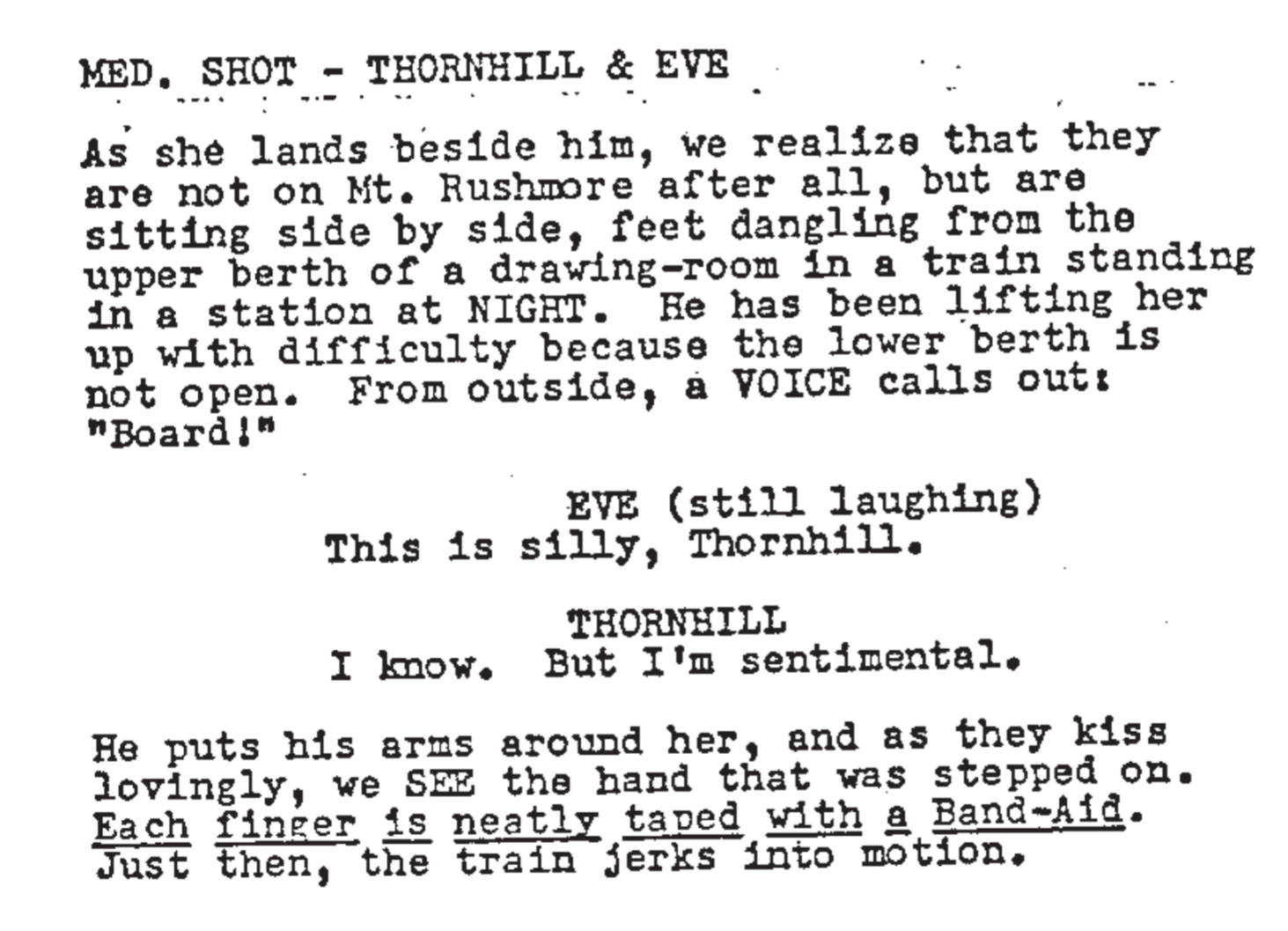 And now check out the result in the movie:

Feel fee to drop me a quick note, and I will get back to you as soon as possible. Yours truly Ben